Many novice Overwatch players wonder what to do if their individual skills are not enough, but they really want to win? Perhaps there is no universal secret of success, but first you need to watch the actions of professionals, and at the same time learn what Overwatch game is. The main thing – to get an initial idea about the peculiarities of the gameplay, and then great benefit will bring the basic recommendations, which are discussed below.

Correct choice of roles on the map

Any newcomer initially wants to take a strong hero to be able to single-handedly destroy all the enemies. Quite a legitimate desire, but it usually leads to a critical mistake. The fact is that the “Damage” position requires certain knowledge and skills concerning interaction with teammates. It would seem that everyone can just beat enemies, but in a complex situation, the damage is definitely not enough. At best, the team will play in a “2-2-2” scheme, so if there is a lack of any resources or skills of a single performer, the problem will immediately be felt by the whole team. Of course, you can gain a minimal advantage over your opponents through well-coordinated actions, but the outcome of the match will still be decided in mass battles. This means that you need to clearly understand how the enemy’s base is protected, in order to strike a decisive blow at the right moment. No one will just stand there and shoot, especially at the professional level.

The easiest and most affordable option for newcomers is to choose a soldier who will fire indiscriminately at the enemy’s targets, without spending a lot of time searching for targets. However, it is much better to bring real value to the team, and for this you need to learn some strategic nuances.

Which character should I choose? 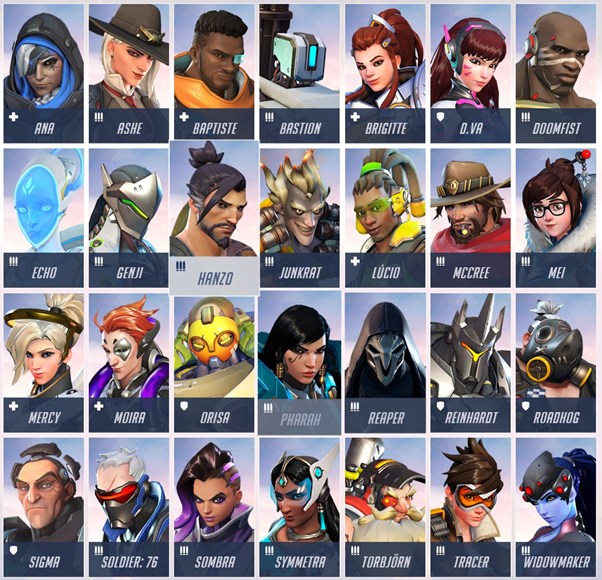 To unlock the potential of one or another character (there are almost 30 of them in the game), you need to get some practice. Without it a person will not have an idea about the strengths and weaknesses of his warrior. Of course, there are also relatively easy to manage heroes, but it is not the fact that in an important game the choice will fall on them. If we talk about training, in battles with friends, you still need to go by the standard scheme: from simple to complex. Also, it is difficult to find an exact answer to the question: what hero does not require the maximum concentration? For example, to control a reaper, you don’t need the exorbitant reaction or quick use of talents, but you rely on the competent movement around the map, without which the efficiency will be close to zero. Accordingly, when choosing a character, you should be guided by the acquired skills, not by visual preferences. Simply put, in every confrontation, regardless of its importance, the player must have a clear goal.

No competitive discipline can be completely balanced – that’s a fact. Computer game developers try to fix this flaw with regular updates, but only reduce the impact of certain things on team interactions. For experienced players, this is not too much of a problem, because they know how to adjust to the meta, unlike newcomers. Consequently, if a person does not have the right skills, he should take advantage of someone else’s experience, or watch the game professionals. After watching just a few broadcasts, it is possible to make a number of important conclusions. For example, if a certain character is used in most matches, then there is a high chance that it will be used while

Abilities are really useful. At the moment, the most effective characters are Briggita, Tracer, and Genji. If managed well, they can single-handedly flip the scenario of nearly lost matches, but it’s still better not to bring it to a critical situation.

You must always keep a positive attitude, even if there are not too many reasons for optimism. Mental fortitude is an important advantage, because in the course of the game you need to make decisions with a cool head. Luckily, in Overwatch your teammates fight quite rarely, as it is hard to tell each other all the claims in 15-20 minutes. The only disappointing thing is that if the fight is still lost, someone will go down in the ranking ladder. This is an important point for those players who are interested in making rapid progress.

Overwatch boosting is the quickest way to improve

Boosting in Overwatch is a service where players can pay to have their account boosted up by professional gamers. It is the quickest way to improve your rank in Overwatch, and it’s a great option for players who don’t have the time or skill to grind their way up the ladder. There are a few things to keep in mind when you’re considering overwatch boosting. First, it’s important to make sure that you’re using a reputable service. There are many scammers out there who will take your money and never deliver on their promises. Second, overwatching can be expensive, so be sure to shop around and compare prices before you commit to anything. Finally, bear in mind that while overwatch boosting can help you improve your rank quickly, it won’t make you into a pro overnight. If you’re looking to become a top-tier player, you’ll still need to put in the hours and learn the game inside out. But if you just want to climb the ranks and have some fun along the way, ow boosting is definitely the way to go.